Somebody up There Likes Me 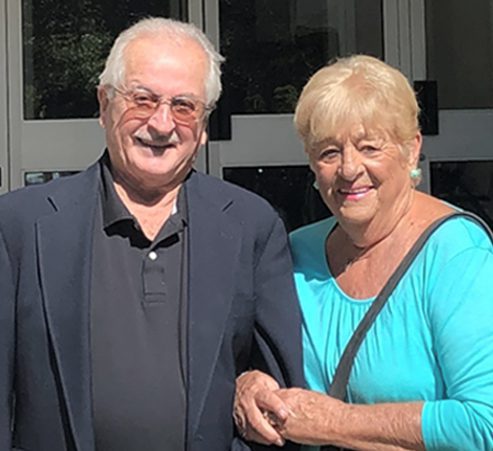 I have always had the feeling that somebody up there likes me. Looking back to my childhood, I remember that when things got tough someone would come forward to help me. Today, I feel guilty and regret that I didn’t properly thank the many people who took the time to help a young struggling kid.

My mother was seriously ill and could not care for my brother and me. We were sent to “St. Agnes School for Boys” which was run by the Dominican Sisters of Sparkill in New York. The very first thing I remember was how the Sisters gave my brother and me a cookie and a glass of milk when we arrived. I guess we looked scared and hungry. That act of kindness and understanding was repeated many times by the Sisters in the coming years.

I was still in high school when I left St. Agnes and enrolled in college. But then, I took a semester off to work because I could not afford tuition. As soon as the government found that I had left school, I was drafted into the U.S. Army. But heaven’s light was shining on me even then because at the same time I met a beautiful brown-eyed girl. We were married while I was in the Army, and we recently celebrated our 60th anniversary!

The Sisters talked about how a strong work ethic would overcome many obstacles. Upon leaving the Army, I began working for a manufacturing company in their lowest position. Shortly afterwards, at 29-years old I became the youngest foreman in the plant, and later I was promoted to production manager—the 3rd highest position of the plant. It was during this time in my life that I realized that the Sisters’ teachings of hard work, understanding, and patience were important in overcoming the many obstacles I would encounter.

The Sisters always said, “when a door closes on you, God will open another.” One evening on my way home after learning that the company was closing, I passed by a vacant restaurant that was for sale. I inquired and was able to buy the property. I had no experience in running a large restaurant, but I saw an opportunity. It took my wife and I two years to transform the site into a profitable, 4-star restaurant. Twenty-three years later, I sold the restaurant and retired to Florida. Friends asked how a kid from St. Agnes who had no money or experience was able to own the popular Tony’s Lobster and Steakhouse. My answer to them was, “Somebody up there likes me!” With the Sisters praying for me, I knew heaven was on my side.

I give credit to the Dominican Sisters of Sparkill for everything I am today. St. Agnes School for Boys has closed. But I know the Sisters continue to care for and help many kids who struggle because of neglect and poverty. My wife and I have recently created our Wills. Within our estate, we made provisions for $100,000 to be given to the Convent at Sparkill. We are hoping this is only the first of many “thank-you’s” we will give to the Sisters. I am also hoping some of the St. Agnes alumni—and anyone who has been helped by the Sisters—will thank them by including the Dominican Sisters of Sparkill in their Estate plans.