Our Ministry in Montana 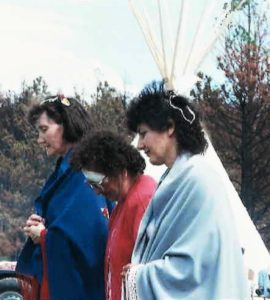 Responding to needs around the country and around the globe, our Sisters have ministered in villages in Peru, among Christian communities in Pakistan, and among the Native Americans in Montana, where Sparkill Dominicans have had a presence for almost 50 years.

In 1973, Sister Kathleen Kane responded to a request from the Northwest Jesuits to serve as Principal of the Mission School on Fort Belknap Indian Reservation in northcentral Montana. That response has led to over forty-eight years of ministry by sixteen Sparkill Dominicans living among and ministering to Native Americans on Fort Belknap, Fort Peck, Rocky Boy’s, and Flathead Indian Reservations. They have served in diocesan offices, in Urban Native American ministry, and in rural parishes. Today, Sister Kathleen continues her ministry of pastoral outreach in Box Elder on the Rocky Boy’s Reservation and in the town of Big Sandy.

Sister Kathleen at the groundbreaking of the new St. Mary’s Catholic Church on Rocky Boy’s Reservation on June 20, 2021. The parish church had been destroyed by fire in 2019. How your donations have helped

Our donors have helped to fund a religious study program, the Catechesis of the Good Shepherd Formation Program, for students in Big Sandy, Box Elder, and Rocky Boy, Montana. We are so thankful to have a community of friends who continue to support our missions. You are always in our prayers!