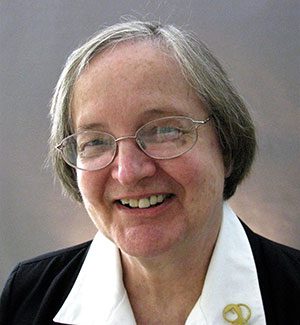 Born in St. Louis, MO on January 8, 1938, Carolyn Sue was the daughter of Frank and Caroline Kolasch Wolfbauer.She entered the Dominican Congregation of Our Lady of the Rosary in Sparkill on September 8, 1955 and received the name Sister Mary Sebastian. She professed her first vows in 1957 and final vows in 1962.

Sister Carolyn earned a BS in Education from St. Thomas Aquinas College, 1960; her MS in Biology from Pittsburgh State University, Kansas 1972; and Certification in Social Studies, Biology and Administration from the University of Missouri, 1981.

Sister Carolyn is predeceased by her parents Frank and Caroline Kolasch and her sisters Judy Millett and Joan Kruse. She is survived by her brother-in-law, Don Kruse, nieces and nephews, friends, and her Dominican Sisters and Associates. Sister Carolyn made a difference in the lives of countless children and families in her ministry of education in New York and Missouri. Her leadership skills were shared in Congregational Service on the Executive Team and as teacher, Principal, and Assistant Principal. She did so in a quiet and pastoral manner and lived the goal of the Dominican Sisters to proclaim the reign of God through ministry for justice and reverence for all creation. May she be welcomed into the fullness of God’s presence—well done, good and faithful servant, Sister Carolyn Wolfbauer.