The encyclical letter Laudato Sí (“Praise be to You, my Lord”) was issued by Pope Francis in 2015. Sister Carolyn Wolfbauer (d. 2022) and I discussed with excitement and hope what the letter could mean for a world confronted by the destruction of climate change. Since its publication, millions of sincere and resolute people—scientists, theologians, educators, politicians, and mystics—have been studying and praying with this inspired document.

The first American-born saint, Kateri (baptized Catherine) Tekakwitha (d. 1680), was canonized in 2012 and designated as the patroness of Native Americans, ecologists, environmentalists, and those in exile or who have lost their parents. Ironically, it took nearly 400 years for her to be recognized and honored in this way. As a Native American woman connected to the earth, she seems to me to be a fitting patroness also for Laudato Sí. One winter retreat I took a walk down to the river in Saugerties, New York, and I became lost in the peaceful stillness, the gentleness coming from the water, the trees, and the air. This was Kateri’s land—the land held sacred by the people who lived on it. Laudato Sí also affirms our responsibility as caretakers to preserve the holy interdependence of humans and the environment in our work for justice that must engage and integrate the cry of the earth and the cry of the poor:

Today, we honor Kateri who was born into a rustic homeland of indigenous people who were becoming intertwined with newcomers seeking to establish a fledgling European society. Although some early attempts were made for a mutual relationship based on trade and shared spirituality, soon disease, greed, and other conflicts led to hostilities and war as well as indentured servitude and slavery. It is important to note that abuse and injustice by some of the settlers require us to repent of these abuses and injustices—including missionaries in black robes bringing the Word of God in the spirit of Isaiah 49:1: "Listen, O coastlands, to me, and take heed, you peoples from afar!” I remember reading The Lily of the Mohawks in school and learning that Kateri’s mother had been captured by another tribe and she and her younger brother had died in a smallpox epidemic—a disease that came from Europe with the settlers. Kateri survived the disease but was scarred and left nearly blind earning her the name Tekakwitha, “she who bumps into things.” Although Kateri grew up in a world filled with conflict, foreign invasion, and disease, she heard the Word of God, and Christ became her whole life.

In honoring Kateri, we also gratefully remember all those who shared the Word with charity. Nearly 200 years after Kateri, Alice Mary Thorpe and Lucy Thorpe came to the new world from London and preached the Word in service to the poor among the destitute women and children in New York City. We continue to carry their treasured ministry to all we meet--with or without words. 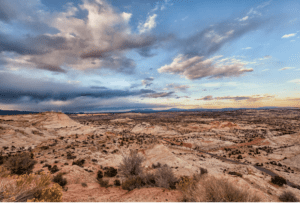 I remember being moved by Fr. George Torok when he preached at the 2016 funeral of Sister Mary Louise Toomey. He spoke of the power of her silence and how she preached with her presence. Did she know she was having this effect? Probably not--which makes it more precious. Kateri probably would be surprised at the world remembering her today, but how fitting that we recognize in one who bumped into things our own sincere and stumbling efforts to praise God in our time by seeking to alleviate the cry of the earth and the cry of the poor.

A resident of Dominican Convent, Sister Bridget is an itinerant preacher and a liaison to the Days for Girls project.